Wow, has it really been over a month since I last posted?

I guess it just goes to show what a footnote cancer has become in my life these days. As the last reminders of it fade, I increasingly file it away in some faraway coda, separate and distinct from my daily life. I don’t spend much time thinking about it – I’m too busy enjoying the company of my friends, the challenges of my job and everything that New York has to offer (which is, mostly, falafel. I could eat falafel for every meal).

But I write today, dear readers, to share some really, really exciting news: the wigs have been officially retired.

I’ve always been pretty average. I don’t mean this in a disparaging way; I’ve got my own charm and quirks and I’m happy with the way I look most of the time. But physically, I’ve always blended in – a very petite girl, nothing too remarkable, long brown hair, brown eyes, a wardrobe consisting mainly of jeans and cardigans. I’ve never stood out physically, or sought to. I’m not the type of gal who’d be interested in a facial tattoo a la Mike Tyson or nipple piercings or some such – although perhaps I should consider the nip piercings, seeing as I’ve got no feeling there these days. That’s cheating, right? I feel like part of the point of intense body piercings is the outward sign that you braved the pain of having your whatsits and doodads pierced and lived to tell the tale.

The point is, I am used to being fairly anonymous and unremarkable, to conforming to Western standards of beauty and femininity. And suddenly…I don’t anymore.

Before I go any further in my musings, let’s have a look at my progress, shall we?

While I was waiting, quite impatiently, for my hair to grow back, I absolutely scoured the internet for play-by-plays of the process and came up disconcertingly short. So I hope that this post can help those of you who may be waiting for your own locks to return. Without further ado, I present to you: the prodigal coif, coming home at last. 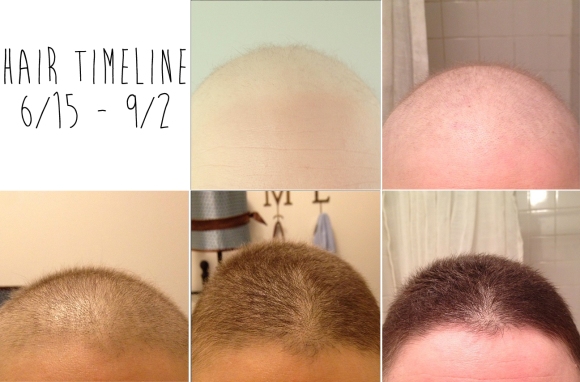 The pictures are about two weeks apart. As you can see, once the hair started coming in, it came in fast and thick. Here’s a shot of me from last weekend, rockin’ the buzz out and about for the first time (not including the times I rocked it while running, which doesn’t count, because I was actively running away from anyone who could possibly comment on it): 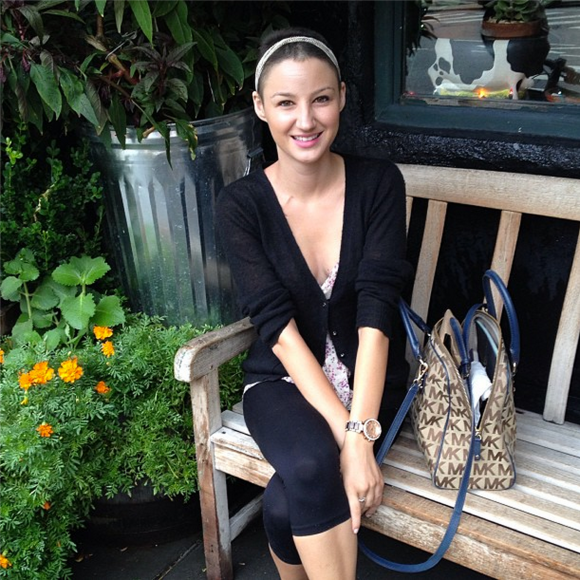 It’s awesome to have my head hair back, but it’s decidedly less awesome to have my body hair back. I mean, what kind of miserable force is biology when it takes three months to grow enough hair on my head to be able to step out in public without shame, yet if I shave my legs in the morning I look like a Sasquatch by dinnertime? Five o’clock leg shadow is LAME, you guys. I forgot how unbelievably unawesome it is to have to shave my armpits and get my eyebrows threaded. I mean, I’ll do it if it’s the price I have to pay to have my tresses back, but I won’t be happy about it.

Okay, okay, I’m being ungrateful. I guess I kind of masochistically missed the sting of eyebrow threading. Actually – serious time – I do kind of love getting my eyebrows threaded, because it’s like this little secret club of women taking care of our women-business, taking part in this ritual that we’ve owned and perfected for generations. I mean, not me personally. I have no idea how to thread anything. But still: No boyz allowed. Reminds me of a book I loved in high school, The Red Tent by Anita Diamant. Warning: It’s (tangentially) about periods and (directly) about the Bible. But it’s amazing, and you should read it.

Having a buzz cut is pretty cool. Like, literally. As in, it keeps me from overheating. The last couple of days have been quite the heat wave here in NYC, and not having anything on the back of my neck is awesome when it comes to regulating my temperature. It’s also amazing to take short showers, something I never did before my cancerventure. I’m like a dude: I can hop in the shower at 8am, and be dry, dressed, made-up and ready to go at 8:15. I can, but that doesn’t mean I do. ‘Cause I admit that there’s nothing quite like standing under the hot steam of the shower and letting the stress wash away. Until it’s time to shave my legs and armpits. Then it’s like, DAMMIT.

So back to what I was talking about at the beginning of this post: I stand out now. The buzz cut is quite the attention-grabber. I mean, I like to be the center of attention, but on my own terms – like when I’m being totally hilarious at the bar and everyone’s like, wow, that girl is so cool! (Note: This never happens except in my delusional fantasies.) Most of the time people are positive. Here’s a list of some of what I hear on a daily basis, roughly in order from most affirming to most WTF-y:

“Your haircut is so bold.”

“Your hair is very ‘Great Gatsby.'”

“I love girls with short hair.”

“I wish I could pull off hair like yours.”

“Do you work in fashion?”

“I just wanted to let you know that I think you’d be really pretty with long hair.”

That last one is actual quote from some random guy in a coffee shop. I was sitting there, minding my own business, with my headphones in – the universal signal for “DON’T TALK TO ME, I AM WORKING AND I DO NOT WANT TO BE YOUR FRIEND” – when this guy came up to me and uttered that bizarre semi-compliment…thing.

I stared at him for what felt like an eternity, trying to come up with something witty to say. C’mon, brain!

Finally I just blurted out, “Yeah, cool, but I had cancer and all my hair fell out and this is what I’m working with now, so…bye.”

I honestly wish I could’ve captured the look on his face, because it clearly did not occur to him that this haircut might be a result of something beyond my control. Which is kind of cool, really, because it means my hair has come so far as to no longer be even vaguely reminiscent of Cancer Patient, but is still lame because who cares what this douche thinks?

He mumbled out some weird apology and something about herbal teas curing cancer (I wasn’t listening to him anymore), and then he walked away and I was overcome with l’esprit de l’escalier, as the French say – when you suddenly come up with all the perfect stuff to say as soon as the moment to say it has passed you by.

I wish I would have said, I don’t care if you think I’m pretty or not.

I wish I would have said, I have more important things to contribute to society than fitting into your narrow, culturally-mandated view of what is and isn’t attractive on a woman.

I wish I would have said, I just wanted to let you know that I think you would be really handsome if you had an entirely different face and a personality that didn’t suck.

To be honest, though, that moment in the coffee shop was one of the most freeing of my life. I’ve spent a lot of time trying to be attractive to the opposite sex. Buying the right clothes, wearing the right makeup, denying myself that second (or fifth) cupcake, burning myself on curling irons, wasting hours of my life in front of the mirror. In facing down this coffee shop douchenozzle, I suddenly realized that beauty has no power over me. I’m ugly now – at least to some random guy in a coffee shop, who I couldn’t care less about – and it’s awesome.

18 thoughts on “THE HAIR POST YOU’VE ALL BEEN WAITING FOR!”